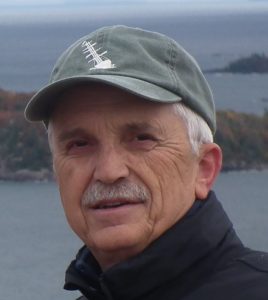 Frederick Stonehouse  has authored over thirty books on maritime history, many of them focusing on the Great Lakes and contributed to several others. The Wreck of the Edmund Fitzgerald and Great Lakes Lighthouse Tales are regional best sellers. Wreck Ashore, the U.S. Life-Saving Service on the Great Lakes, won a national publishing award and is the predominant work on the subject. Another book, Haunted Lakes, Great Lakes Maritime Ghost Stories, Superstitions and Sea Serpents, has opened an entirely new genre in Great Lakes study. His book, Final Passage, is the first Great Lakes shipwreck book for children.

He has been a consultant for both the U.S. National Park Service and Parks Canada and has been an “on-air” expert for National Geographic, History Channel and Fox Family, as well as many regional media productions. Awards for contributions to Great Lakes maritime history have been received from Underwater Canada, Our World Underwater, Marquette Maritime Museum and Marquette County Historical Society. He is also the recipient of the 2006 Association For Great Lakes Maritime History Award for Historic Interpretation. The Award is presented annually in recognition of an individual making a major contribution over many years to the interpretation of Great Lakes maritime history in furtherance of the goals of the Association. In addition he was named the Marine Historical Society of Detroit’s “2007 Historian of the Year.”  The award is the result of election by past MHSD Historians and recognizes persons who have actively contributed to the study of Great Lakes history.

He also received  Northern Michigan University’s Distinguished Alumni Award in 2014. It is given annually to alumni who achieved outstanding  accomplishments in their field, made significant contributions to society and demonstrated leadership and civic qualities. In 2016 he was named a Paul Harris Fellow, one of the most prestigious awards in Rotary, for services above and beyond to the local and international community.

In 2017 the Great Lakes Shipwreck Preservation Society presented Fred with the C. Patrick Labadie Special Acknowledgement Award. This recognition is, ”given annually to the individual or organization that has made exceptional contributions to upper Midwest preservation, history or dive community” In 2018 Lake Superior Magazine honored Fred with it’s  Achievement Award “given annually to individuals and organizations that have contributed significantly to the well being of Lake Superior and it’s communities.” On November 8, 2018 he received a “Governor’s Special Tribute” from the State of Michigan for his accomplishments in maritime history. He was honored with the 2019 Historical Society of Michigan “Follo Award” in recognition of his his contributions to preservation and promotion of Upper Peninsula History.

His articles have been published in  Lake Superior Magazine and Wreck and Rescue Journal  as well as other publications. He is President of the Board of the Marquette Maritime Museum, member of the National Board of Directors of the U.S. Life-Saving Service Heritage Association (past president) former member of the Michigan Iron Industry Museum Advisory Board (gubernatorial appointment) and past Vice Chair of the Michigan Ports Collaborative. In 2014 he was appointed to the Advisory Board for the Sustainable Harbor Management Investigation (Michigan). Fred makes his home in Marquette, Michigan with his wife Lois.